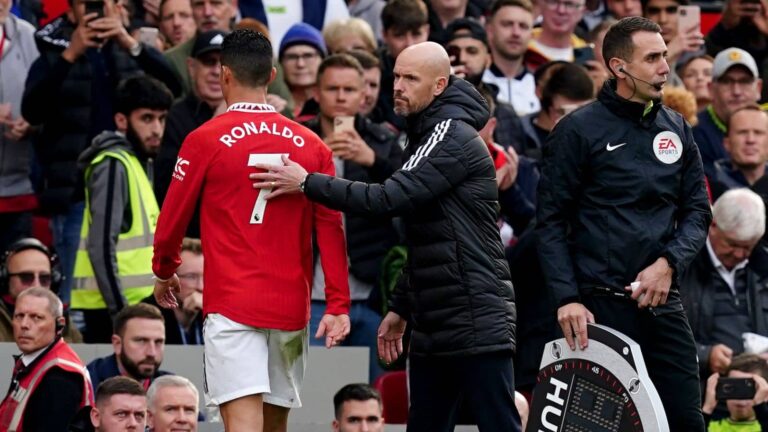 Cristiano Ronaldo will be made to train away from the Manchester United first-team squad and will be left out of the squad for the Red Devils’ trip to Stamford Bridge this Saturday.

United released a statement on Thursday afternoon that read: “Cristiano will not be part of the Man United team for this Saturday’s game against Chelsea. Rest of the squad is fully focused on preparing for that fixture.”

In the 89th minute of the 2-0 victory over Tottenham Hotspur, the 37-year-old walked down the tunnel after refusing to come on a substitute. It has also been revealed that he left the stadium before the match finished instead of waiting in the dressing room for his teammates.

When asked about the Portuguese leaving before the full-time whistle, Erik Ten Hag said: “I do not pay attention to it today and we will deal with it tomorrow. I now want to focus on the team and enjoy the victory with the team.”

The situation has become sour with there being a clear divide between Ten Hag and Ronaldo. The striker wanted to leave in the summer of 2022 and he made his feelings clear. The Dutch manager also facilitated his departure but the club ensured that the Portuguese international remained at the club against his will.

Ten Hag is reportedly unhappy with Ronaldo’s conduct and subsequently took the decision upon himself to suspend the forward and set a precedent for any future problems that pop up within the squad.

The United hierarchy have taken side with their manager and support his stance on the situation. Many now feel that Ronaldo’s second spell at United is all but over, especially with the World Cup fast approaching.

Wednesday night was the third team from the ‘top six’ that United have beaten this season after wins against Liverpool, Arsenal and Spurs.

The Red Devils now travel to the capital as they prepare to face Chelsea at Stamford Bridge on Saturday.